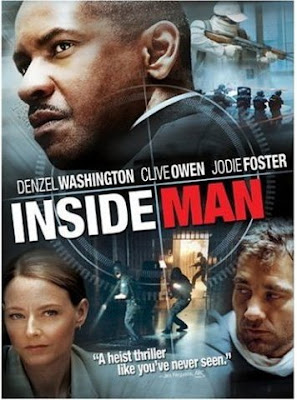 I love heist movies heists. It's one of the secret fantasies I think all guys have. I also love movies about heists where the "bad guys" are the ones we root for. This movie combines a "bad" guy I root for and also a good guy I equally root for. It's a really strange movie for that reason. Also, if you put Clive Owen in a movie, especially one where he acts all cool, I will watch it.

Dalton Russell (Clive Owen) and a bunch of his partners decide to hold a bank. They have one of the best plans I have ever seen in a bank heist movie. They barricade all the doors, tell the cops that if anyone comes in everyone's going to die, and they dress the hostages just like them. I won't go more into what all they do but it was beautiful to watch. Detective Keith Frazier (Denzel Washington) is sent to deal with the situation and end it as peacefully as possible. He soon finds himself stuck in between the robbers and a privately hired "fixer" played by Jodie Foster. Believe it or not, this is actually a Spike Lee movie and he did a great job with showing what needed to be shown and hiding things in plain sight. I rarely give credit to the writer but this was Russell Gewirtz's first movie script. He did such a great job.

This is one of the best heist movies I've seen in quite some time. This puts "Swordfish" to shame in the twists and turns it takes. There were just two problems I have with this film. The first is the ending is a bit confusing. I really didn't understand what Washington wanted Foster's character to do. The other is Jodie Foster's character was pretty much pointless and didn't offer anything to the story. If you would have taken out every scene she was in, you would have lost nothing to the overall story. I am surprised that this is a Spike Lee movie. It certainly didn't feel like it. A good bank caper. Clive Owen is spectacular once again.
Posted by Film Geeks at 11:56 PM