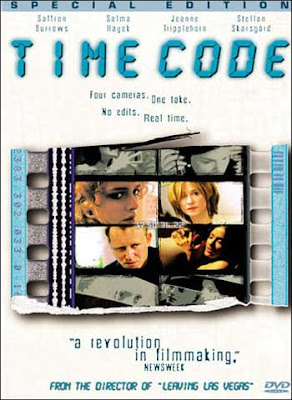 Once in a while...a great while...a movie comes along and tries to break the monotony of standard movie making. Sometimes it works and sometimes it doesn't. Sometimes a movie is ahead of its time so much that it isn't until much later that others pick up on the trend.

Unfortunately, the only thing this movie has with what I've written above is that it tried something different.

The movie was written and directed by Mike Figgis and looking at his credits he's had some directing/writing credits before this movie that I would assume allow him to write and direct a decent script. I guess having both under your belt doesn't help much.

This movie is film in four windows and it's up to you, the viewer, to pick which to watch. The dialog is focused at times on one screen so the director doesn't really let you choose. The movie is also filmed in real time. You never really realize how boring a "normal" person's life is until you watch this movie.

Lauren (Jeanne Tripplehorn) and Rose (Salma Hayek) are lovers and Lauren suspects Rose of cheating on her with a movie producer. She plants a bug on Rose and listens to her from her limo. We also see a bunch of other people but I don't really want to describe this plot anymore.

This is one of the most horrible excuses for a plot and movie I have ever seen. The split screen would be great for a spy or thriller movie where, while your gaze is on the screen that the dialog is happening, something is going on in other screens that you need to know about to figure out the ending. This...feces laden script is about nothing at all and I was never so bored with a movie. I would rather watch someone how to teach me how to build a wood cabinet from scratch than watch this movie. Sure the carpenter movie wouldn't have a lesbian make out scene, but the cinematography and script for his show would be better than this pile of baby mucus.

How this movie got made, and got good reviews, I'll never know. There is not even a semblance of a plot going on in this movie and the ending is utterly unbelievable and ridiculous. After watching this movie I felt as if I were repeatedly slapped by a marlin. I might have enjoyed that better.

Plot? We don't need no stinkin' plot! We'll just say the movie is avant-garde and we'll make it sound like it's an intellectual film. That way people won't admit to not getting it because it'll make them look stupid. Seriously folks, watching one episode of any soap opera is better compare to this dreck.
Posted by Film Geeks at 9:37 AM

I love this movie--especially the animation. Lol I'm sorry-- I just like it!!