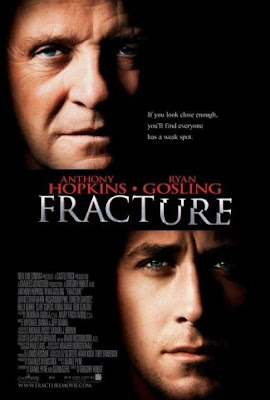 Thrillers are one of the best movies for audiences who want to think. If done correctly, you can give all the clues out that would allow someone to figure who/what/when/where/why/how something was done. If done perfectly, you can give out all that information and still not have the audience figure it out.

Anthony Hopkins plays Ted Crawford, a rich, brilliant, and meticulous structural engineer. He finds out that his wife is cheating on him and so he comes up with a cunning plan to not only carry it out, but how to get away with murdering his wife. The audience is given everything but the how of the movie. Crawford is arrested where he confesses but pleads not guilty to the charges and represents himself. His prosecutor is Willy Beachum (Ryan Gosling). This is Beachum's last case as a public assistant district attorney before he goes to a high priced private firm. Beachum has hardly ever lost a case and already has one foot out the door. That is, until he agrees to prosecute what he sees as an easy case involving Crawford. Twists and turns happen in the course of the case that tears apart this "simple" case and Beachum's near perfect streak and new job are on the line. He learns that Crawford is up to something. He just hopes he can figure out all the questions before Crawford gets away with murder.

This is a mixed movie for me. It really has some great parts and some not so great parts.

First of all Anthony Hopkins, once again, is spectacular in this movie. There has rarely been a movie he has acted in that hasn't been wonderful. It really says something about an actor when you expect greatness from him because of his past roles and he keeps surprising you with his greatness in his current one. You find yourself almost rooting for his character in this movie. The only problem with that, aside you're rooting for someone who wants to murder his wife, is that the movie switches gears towards the end of the movie and tries to force you to switch your allegiance to rooting for Gosling's character. That didn't work out too well for me.

Second, the way in which the story is told is a credit to both the writers (Daniel Pyne and Glenn Gers) and the director (Gregory Hoblit). Again, this movie gives you all the clues you need to piece together the how. The not so good part I had with the story was the focus on Beachum's new job and showing a lot of his arrogance. There is a lot of filler that could have been cut and you wouldn't have lost much. If you need to show his arrogance you can write that into the character, I don't need to see specific scenes that add very little to the overall story.

My biggest problem with this movie is Ryan Gosling himself. I know a lot of people liked him from "The Notebook" but he shows himself to either be a rookie actor or he gave himself/was giving a big character flaw. Throughout this entire movie he is always touching his face. When I say throughout the entire movie, I mean in every scene and all the time. It's one of those habits you see rookie actors have when they don't know what to do with their hands. If that's not what it was, then putting this flaw into his character is makes him not likable at all and they shouldn't have let him do that if we're suppose to root for him towards the end. It was so distracting that I cannot write enough on how stupid it was. I wanted to reach through into the movie and take two huge railroad spikes and drive them into his hands and his thighs so he would stop touching his face!

Any movie where I can't figure out how the killer did it is good in my book. I'm pretty good at figuring out these types of movies but this one did such a good job that it stumped me; it was quite enjoyable to. This movie would be better if the ending was different (not wanting to give anything away) and if you watch the extra features and notice the alternative endings you know they picked the best one. Still I understand why a certain person couldn't win because that's what the whole point of the movie was about. Still, even Hannibal Lecture got away! Anthony Hopkins is, without surprise, the best actor in the movie and he definitely has a gift for knowing how the play a role, especially the eccentric role he has in this movie. There's no way Ryan Gosling could even come close to outsmarting Anthony Hopkins. It's a good movie, just don't expect a whole lot from half of the main actors involved.
Posted by Film Geeks at 1:46 PM