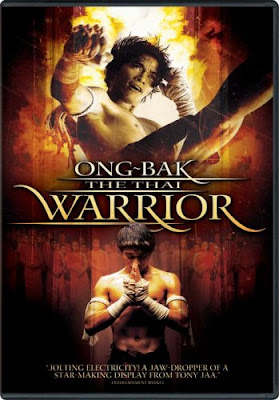 Once every few years the kung fu movies (as I call them) come out with some surprising new actors/artists/people that just blow me away. The first time watching Bruce Lee for any kung fu fan is memorable and inspiring. Seeing Jackie Chan for the first time was a new spin on what we saw Lee do, a more fluid motion. Jet Li's fighting style was awe inspiring and the art he puts into his work is amazing. There have been others and I hope there will be others to come.

I have found another great kung fu star in this movie.

As you can tell from the subtitle, this is a film from the great country of Thailand. Because of this I do want to mention a couple of people in here and not just say that there is no one of fame. I don't think I would be a good person if I would do what many professional reviewers do today with foreign films that aren't considered popular or "artistic". The film was written and directed by Prachya Pinkaew. This was the first movie he made that crossed the pond to America. Overall, he did a really good job with just a few exceptions and I'll talk more about those in my critique section. However, for a Thai movie it's very professionally done. He does well at combing both action and comedy into his film. He also does well with incorporating the fighting into the storyline, a hard thing for American films to do. The comedy is a plus here as it's not the typical Japanese silly style we've come to expect from these kung fu/comedy combinations. I'm not saying this is a funny kung fu movie, but a kung fu movie that incorporates the appropriate amount of comedy.

Tony Jaa is the main character of this movie and let me tell you about him! If we don't see this young chap in more movies, Thailand has failed us as a species. This man's fighting style and moves are beautiful. He incorporates a lot of the power of Bruce Lee's fighting skill with a lot of the fluid movements of someone like Jackie Chan's. Another plus to this great fighter is that he uses no wires, no CGI, and he does all his own stunts. This film shows what I have mentioned above beautifully. I would almost wish he'd come over to America right now but he has said he wants to develop himself in Thailand first and then maybe go to the US. I greatly respect that, you don't see that much cultural respect anymore; it's like watching a great player like Barry Sanders stay with the crappy Detroit Lions because of pride and unity when he could have made the big bucks and possible championships. I really can't say enough about this young man's fighting ability. The stunts he does in this film are jaw dropping. He'll jump over a couple of cars like track hurdles, his feet are on fire (literally!) at one point and he's still fighting, he double knees a guy through a floor that was just pure awesomeness, and much, much more. To list all the cool stuff I saw in this movie would do a disservice to his skills so I suggest you watch it instead of reading my descriptions of it. It's almost sad to see that he hasn't been in a lot of films after this movie, although a sequel is in post-production right now for "Ong-Bak". I, for one, will be renting it just to see him.

The story is kind of a typical eastern movie story. However, it's not a bad story and I have to realize that this was made for more of an eastern audience. Still, this reminded me a bit of "Bulletproof Monk"'s storyline, although an annoying Shaunn William Scott isn't in this, thank goodness. So Ting (Tony Jaa) is just your simple country villager who just happens to be one of the best fighters trained by a wise monk. When the villagers deity's head from the statue is stolen by gangsters who are in the black market of ancient antiques, Ting is the village's best hope to recover the head before the special ceremony occurs. Ting meets up with a former villager who has left to join the big city life, Humlae (Petchtai Wongkamlao) or George as he's now calling himself. He has shed off all aspects of his old life and changed his family name; he has also mixed himself up with gambling on illegal fights. Humlae is selfish, is only looking out for himself and his grifting partner with a heart of gold, Muay Lek (Pamwaree Yodkamol). Ting must fight his way through the main boss' goons in order to recover the head of Ong-Bak and save his village. Hopefully he can also convince Humlae not to deny his heritage and his village.

This is a cornerstone film in the kung fu genre. Tony Jaa is a wonder to behold. Doing his own stunts with no wires or CGI is a treat in today's age of flying people for no reason. His stunts are jaw dropping and his fighting style is truly avant garde in this genre. He is a new Bruce Lee or Jackie Chan or Jet Li. I seriously hope he makes it big and makes a ton of more movies. I would recommend this movie to anyone who likes the kung fu genre or great action. There is really only one nit pick I have about this film and it was the reason I couldn't give this a full A+ grade, well other than the almost typical storyline. As I have said previously, there are some great action shots. However this director was so impressed with them that he shows us some of them two or three times. I understand the pride people have in their work but this is an amateur move. Yes, I might like to see these scenes in slow motion over again a few times, but putting them in the movie takes me right out of the action and the story. I also had a small problem with lighting in the cave fight and the American voices being dubbed were horrible, except for the funny referee. However, other than those two shortfalls, I highly recommend this movie to anyone. This also shows what great movies can come out of other parts of the world, other than Hollywood. Bravo Thailand...bravo.
Posted by Film Geeks at 7:13 PM

Ong-Bak was wicked cool. I never talk like that but it seems to be appropriate here. Tony Jaa stunned me too. The fights were so hard hitting that I recoiled from every punch.

He has Bruce Lee's economy of movement and Jackie Chan's stunts, but he hits harder than either. He has the elegance of Jet Li and does the splits like Jean-Claude van Damme. What can't he do?

And there are some other cool Thai movies out there. Check out a director called Pen-ek Ratanaruang who is a new favourite of mine. 6ixtynin9 and Last Life in the Universe are both very cool indeed.