Ever Since The World Ended

Ever Since The World Ended 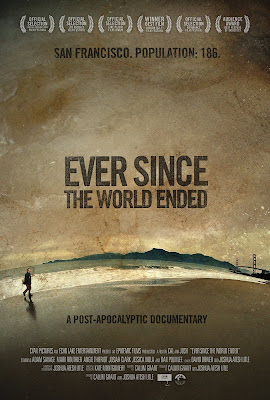 I love post-apocalyptic movies. Humanity laid to waste for whatever reason. Now they must fight to survive or band together to survive or take out the guy with the butt-less chaps so he doesn't steal their oil.

This movie incorporates the story of the destruction of humanity to a very few and a first hand perspective mocumentary (aka fake documentary). So basically you have a cross between "The Postman" and "The Blair Witch Project". The main question I had before seeing this movie was, "Is this going to suck as much as "Blair Witch" did?"

Twelve years have passed since a plague swept the planet killing out most of the population. The film revolves around two guys who decided to document the post-destruction era they live in on video for future generations, if any. They live in San Francisco where they are only 2 of 186 people remaining alive. So the film makers give us a taste of what life is like. They interview a kid who is a "finder of anything you need" by raiding houses of the dead. We see the group council deciding how to carry out punishment. We see how family life has changed and how children who have grown up post-plague feel about the "times before" that they never knew. A bunch of subjects, if properly done, could make for a very interesting movie.

Unfortunately, this movie fails at telling the story they wanted to.

The production value isn't the best, but I hold that against no movie. I hate to see Hollywood have a monopoly on movie making so I will watch a movie shot on a 1980's home video recorder and appreciate the story for what it is (and I have to!).

This movie is horrible. I know people will and have picked on it for having little production value but I don't hold that against anyone...unless you're "Blair Witch", and your movie has nothing in it. This movie at least tells the tale of how people would be like after they grow accustomed to the notion that the world just started from scratch again. I liked that it showed a wide selection of people. Kids who knew little to nothing about the "time before", people starting families again, "deviants", etc.

The real gripe I have with this movie is that it allows people to talk too much and doesn't show much about the daily struggles that the people have to face. It's mostly about how people came to this point and what they do now. We're only treated to a small insight of the new "governing body" making a decision about a "deviant". What happens after that is a bit confusing (not wanting to give anything away). Also, they never explain why they wanted to film outside the city at all. We're just suppose to guess. There are also no fun shots of a deserted city or any aftermath shots. It's a nice talking points movie...but not much of anything else.
Posted by Film Geeks at 10:20 PM

Labels: bad, Ever Since The World Ended, independent, movie, review

Did you ever read "Earth Abides?" The basic outline of the plot here is ridiculously similar. And while that story had several deficiencies, it was entertaining, nonetheless - and even thought provoking.