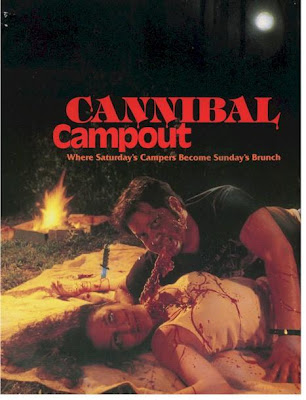 This is one of those campy horror movies I've talked about before. This movie was made with a home video camera and sold to mom and pop video stores. Those were the good ol' days when you didn't have to compete with horrible, Nazi-like chains like Blockbuster, shrink wrap covered each movie, and DVDs were a thing of the future!

The story is about four high school teenagers who go to the woods camping. They are attacked by three psychos who want to do what any psychos in the woods want to do - feast on their flesh. It's your typical B movie, 80s self made slasher flick.

Jon McBride directed and stared in the movie and it's interesting to note that he actually went on to direct and star in a few more movies. Quiet a few of these "actors" and "directors" do one picture and then end it. He also did "Woodchipper Massacre" which isn't as good as "Cannibal Campout" and is a bit too boring in my opinion. He also stared in the atrocious Alien Conspiracy trilogy but only in Grey Skies. Amy Chludzinski also stars as a prominent character. She's probably the best character in this film. It's sad to see she didn't do any other acting. Her character is the only one I've seen in these types of films who is pregnant and that it plays a part in the overall story. It was a gutsy move to do what they did with her character.

I've seen a lot worse with these types of movies. With these movies it's easy to complain about the picture and sound quality, the acting, and the weak plot. However, you could complain about the overuse of CGI, using stars because they're bankable, and weak plots in today's Hollywood crapshoot. This is a really decent B movie flick. The story, the director, and the actors know exactly what the purpose of the movie is. They don't try to make it bigger than it can be. The story is suppose to make you aggravated and yell at the characters as to what they are doing wrong; including splitting up, saying "what's the worse that could happen", and not leaving when they should. At least one of the characters puts up a fight. The bad guys are a little boring but one of them stands out among the others. The one psycho who wears a flight helmet would have been much more menacing if they could have put him in an old gas mask, those things are freaky. If you're a fan of this genre this is a good movie for you. If you get the DVD there are even a bunch of extras which is amazing. Most of these re-releases are just thrown onto disc without any consideration to trying to improve the picture quality or give fans a few extras.
Posted by Film Geeks at 2:05 PM

I recently came across your blog and have been reading along. I thought I would leave my first comment. I don’t know what to say except that I have enjoyed reading. Nice blog. I will keep visiting this blog very often.