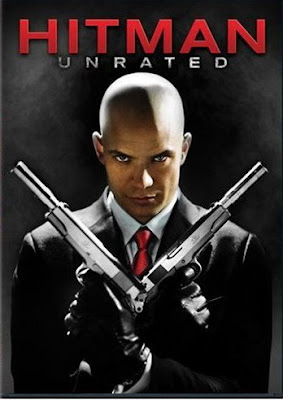 I played the games and I loved it. I saw the previews and thought it looked good. I heard the negative reviews from trusted sources and my head hung in sadness. I got it and watched it; expecting nothing.

A director, Xavier Gens, who hasn't really done anything and a cast of almost nobodies make up this film. Timothy Olyphant who plays Agent 47 hasn't really been in any lead roles. The girl in this movie, Olga Kurylenko, has that Russia look I adore but hasn't been in a lot of movies.

The plot is pretty simple and does not tread new territory. Hitman is hired to take someone out. He is then set up and attempted to be taken out as well. He escapes with a woman who knows too much in order to take revenge of those that plotted his demise. Like I said, nothing we haven't seen before.

I really did! This movie is a perfect example of a great action flick. You have some great gun battles, you have sword play, you have espionage tactics, you have some comedic elements of the hitman, explosions, and cat and mouse games where you know neither who is the cat nor who is the mouse. The only problem with it is that there is nothing new in what is added. Of course, I believe, if you have enough elements to it and your characters aren't one dimensional this storyline is good to this day.

I don't know why a lot of people didn't like this flick. I played the video game and saw elements of the game in here. We have at times a few shots of behind-over the top third person exactly like you have in the video game. The only thing I couldn't stand in this movie was a clear plug for the game is shown in the movie. Agent 47 crashes through a window and the kids in the room are playing Hitman. The problem I have with that, is that it's the main focus of the shot when you see it. I like my little cameos hidden a bit or not the focus and you kinda have to notice it and it makes it that much more special. I have to say that this is probably one of the best video game movies I've seen. You have elements from the game incorporated into the movie but the story could have survived without the game. You get to see Agent 47 take on discuses like in the game, you get to see the piano wire like in the game, he walks like he does in the game, he even holds his sniper rifle when he's walking like he does in the game.

I really hope to see more Hitman movies. I really don't know why people don't like this movie. It stays true to the source material while improving on it and making it seem like a movie with game like moments in it.
Posted by Film Geeks at 6:20 PM