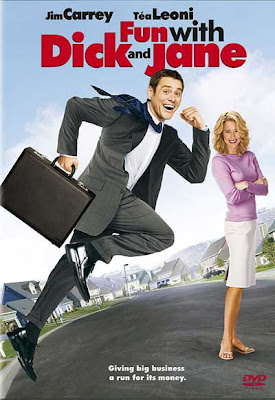 Ahh remakes. The dying grasp of Hollywood to reuse ideas that worked once a few years ago and "update" them. I'm still waiting for that updated version of "Citizen Kane". What's that you say? It's too precious of a movie to do that to? Well I would have agreed with you up until 1998 when "Psycho" was remade or 2006 when "All The King's Men" was remade. I'm still waiting for the movie remake with enough gull to show, shot for shot, the same movie with the new actors.

The best thing about this movie is that it brought back Jim Carrey to what he does best - his own brand of comedy. Not since Bruce Almighty have we got to see him back in his element of being really funny. His improve shows in the film and I believe it actually helps the movie. Te'a Lenoi plays his other half and I can never really see her in these types of comedy movies considering her voice hardly ever cracks beyond that harsh whisper of her normal speaking. Alec Baldwin even got roped into this picture, I don't know how, but he did.

The story is the same as the old one. Dick (Carrey) looses his job after getting a promotion he has been working for for a while. Before knowing he was going to lose his job, he convinces his wife, Jane (Leoni), to quit her job. So with both of them out of work and still wanting to maintain their standard of living, Dick decides to steal the money he needs to keep up with everyone around his block. There are definitely some clever and hilarious ways both Dick and Jane carry out their cappers. This leads Dick to the plan of stealing from the man who cost him his job, his former CEO Jack McCallister (Baldwin). They also need to prove that Dick did nothing wrong when the company closed or he will face enditement with the rest of the company players who are taking the fall for the CEO. McCallister plays your stereotypical smug, pompous, arrogant CEO type, but I don't see why you had to get someone like Alec Baldwin to play him.

Now I'm usually not one for remakes, but this was just hilarious. It's Jim Carrey being himself again. No man trapped in his own world, no crazy "spotless mind", nothing like that. He is funny again! For once, Tea Leoni almost acts! In most of her movies, if she isn't crying, then she has that look like air is going in one ear and out the other and you can actually hear the whistle or she has a stupid look of a puppy dog. There are a few minor plot points that I didn't like too much and it's a bit slow starting and that's why I didn't give it an A. However, this movie was still funny. Watch the deleted scenes too and you get to see a lot more of where the director wanted to take the characters. Things like "keeping up with the Jones'", and steal for convince rather than need, and a great fight with an old man. The gag real on the DVD is hilarious as well.
Posted by Film Geeks at 12:54 PM