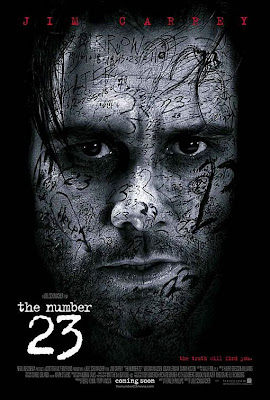 I was torn between watching this movie or not. On one hand you have a movie about the "secret life of numbers" and an interesting twist on numerology. The trailer for this movie made it appear interesting (TV Spot). These types of stories I've always been a fan of. On the other hand you have Jim Carrey once again, trying to act in a serious role and those rarely turn out good. Then reading the reviews on the film by not only "professional" movie critics but also "normal" people, my interest sank a little bit more.

The film is directed by Joel Schumacker, who has always been a hit or miss director. Jim Carrey plays Walter Sparrow who starts out as your normal, everyday dog-catcher family man. This movie relies on fate a lot so it might take multiple viewings of this movie to notice everything and maybe even understand it completely. Don't worry though, it's not like "Donnie Darko" where my 15th viewing of the movie still doesn't explain everything to me.

On Walter's birthday a dog bites him which causes him to be late to meet his wife, Agatha (Virginia Madsen). As she is waiting for him, she wanders into a bookstore and picks up a book that revolves around the number 23. She gives it to Walter for his birthday and after reading a bit into it, Walter is captivated by the book. He also notices that the book seems to have parallels to his own life. He then notices how the number 23 plays out in his own life. After becoming obsessed with the number 23 and finding out what connection the number and the book has, he goes off in search of the author and why it was written.

From all the bad coverage of this movie I was let down after I decided I wanted to see this movie. It was hard to put those negative comments out of my head while watching it. Maybe they made me like it then.

This movie is pretty good. The cinematography is pretty good and Jim Carrey does a pretty good job at acting in a somewhat serious role. I wanted this movie to drag out more of the numerology aspect. The progression of the story is fairly quick and well presented. The movie reveals certain pieces of information quick enough not to leave you bored and watching filler. I won't give too much away but I do have to mention that the least believable part is that the person who moves the body would actually do that...no matter who the other person was. One of the most decent thrillers I've seen in a while. They just don't make movies like Se7en anymore.
Posted by Film Geeks at 12:51 PM