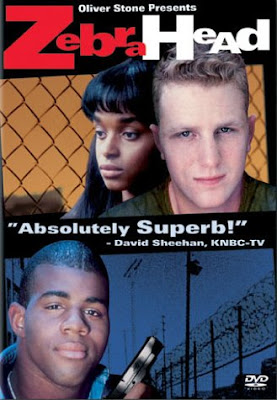 I love interracial movies. Not only do they have oodles of drama, they are almost always entertaining to watch. Also, it's always nice to see a white guy get with a black chick instead of your typical black guy/white chick. I just hope more "sistas" give "whitey" a chance. Wow, that was as ghetto as I can get and I barely pulled it off.

I hate to say this, but the story is a modern day tale of Romeo and Juliet. Of course, R and J only had to kill themselves, they never had to live in Detroit like these characters did. Zack and Dee are best friends and they love each other like brothers. The one thing the outside world won't let them forget is that Zack is white and Dee is black. On top of that, Zack is always being accused of "acting black". To make matters worse, Zack starts dating Dee's cousin Nikki. His white friends think he's dating her because of the sexual stereotypes of black women and her black friends can't understand why she's dating him with all the white stereotypes there are. Zack is even accused of "experimenting" with black women by Nikki's mom.

So let me summarize, an interracial couple must over come their friends and families stereotypes, their own needs to fit in, and on top of all that...they live in the stink pile known as Detroit. Of course, this isn't the end of their troubles, oh no! A local gang-banger named Nut (ya really!) gets the hots for Nikki. Like the old song goes, "Clowns to the left of you, jokers to the right; stuck in the middle with you". The song rings true as racial tensions begin to boil, will our two love birds make it out alive?

The movie was written and directed by Anthony Drazan and it's sad that he hasn't done a lot more work. His ability to capture some great drama probably got him his one shot directing on "The West Wing" but that's about it for his credits. Writing drama aside, his ability to craft a decent story with a lot of characters you not only care about but could possibly identify with. Michael Rapaport (of Boston Public fame) plays Zack. Michael definitely has the widest range to work with. He gets to play the bridge. He finds himself in two worlds. He knows he's white but he knows the way he acts makes people think he's trying to "act black". He's a flawed character but he pretty much knows who he is. In this movie you have some great scenes of "sampling" and mixing music that his character does too. DeShonn Castle plays Dee and it's kinda a let down you don't get to see as much of him as you do Zack. You can definitely feel the brotherhood and love between the two but the main focus seems to be on Zack. N'Bushe Wright plays Nikki and this was her first of many roles she has undertaken. She is also gorgeous. She has that "girl next door but could probably kick your butt" look to her. Personally, that's my favorite look. Growwwl! Ron Johnson plays Nut and he plays a classic villain that you automatically hate. You don't want him looking at Nikki the way he does, you don't want him to have any part in the movie other than to get beaten down or something. Johnson was a great choice for the role and he plays out the character perfectly.

Overall this is really a great movie. The draw of the audience to the characters, the heightened state of racial tensions in inner city Detroit, and the high drama are all positives to this film. The story moves a little too quick for my taste as I would have loved to see more of the relationship Zack and Dee had. Nut is a great villain and he was played perfectly. I would compare this movie with being on par with Spike Lee's "Do The Right Thing" with a reversal outlook with a white kid in a predominately black neighborhood. The use of sampling and mixing music in this movie makes for some entertaining film, as well as having a great soundtrack. This is one of my top five interracial movies. I highly recommend it!
Posted by Film Geeks at 5:50 PM

i finally got to watch this in it's entirety last night on encore. i also love interracial films. i have no idea why, but they just feel so real to me. mostly because i have only been in interracial relationships(not by choice, things just always kinda happened that way). but anyway i just wanted to thank you for the review! ill be sure to look at more :) if you wanna talk about the movie some more my email address is iuokere12@gmail.com