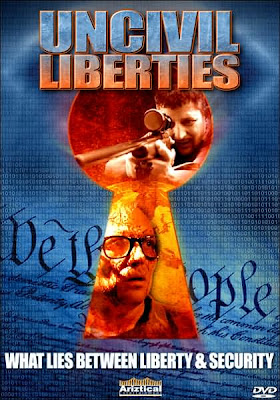 Be advised when dealing with B movies! If you know it's a B movie, but the box looks awesome, they are trying to fool you! Be advised! This is a B movie. Good thing I don't hold that against them. I'm not going to hold the poor video quality or the iffy acting against them. I judge these types of movies based on plot and entertainment. After all, if I expected Hollywood gold from every movie, every movie would end up like crap. I applaud these brave heroes who shirk off Hollywood stigma and strive to make a good indie film!

The story is set in the near future in America. The two main characters that we follow are on opposite sides of the wall of "security". In this dystopia, the US government is spying on its own citizens, both secretively and outright, in the same of security. There are a group of rebels made up all sort of disenfranchised citizens with different reasons why they are rebelling. On the side of the rebels, we follow Mike Wilson who decides that he wants to renounce his rebel ties because of the violence that is asked of him to carry out. On the side of the government, we follow Cynthia Porter who rebels against the government spying operation she helped to create by sabotaging her program. Oh the irony! Cynthia's own program is turned against her while Mike's former rebels deem him a security risk. Oh the irony!

I would talk about the "stars" in this film. But as of right now, they aren't.

Oh how I wanted to like this movie! This movie had a lot of potential. It started off really good and seemed to have a good plot. Then they lost me in the middle; especially with a 20 minute slow chase through the forest. I tell no lie! 20 minutes...chasing a guy...through the forest...for no reason! The main problem I have with this movie is that I have no clue what their message was. They say there is a system, then there isn't one, then there is again.

I didn't care about the low production or the amateur cast...this movie was about the story; and because of that...it faltered. The story could have been better if they would have stuck to the "rebels vs. the system" plot line...but it didn't. Not to mention, I wasn't really given a sense that people in this movie were being tracked and exploited by the system/government. Again, the plot seemed to sea-saw in the message which hurt them the most. If you're going to make a movie about a overbearing government surveillance system that both sides admit you should show it working, show why it's bad (or good depending on your message), and your story elements should revolve around it in some way!
Posted by Film Geeks at 10:57 PM