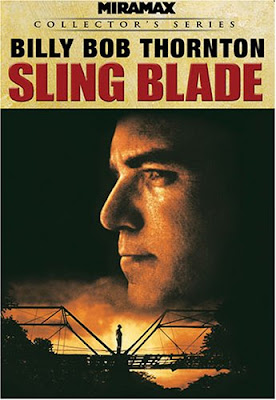 When something says that the same guy who stared in Bad Santa wrote, directed, and stars in a drama movie, I tend to be skeptical. Either I was expecting badness on the scale of Daredevil or this really was a good movie. The original DVD box has good praises galore on it. Almost like it was trying too hard to sell me on actually believing that Billy Bob Thornton can play a serious crazy guy rather than just the crazy nut he really is.

The thing that really sold me on giving this movie a chance was the plot and a supporting character. Imagine this story being if in "Silence Of The Lambs" Hannibal and Clarice became friends and supported each other in each other's lives. Wow, isn't that a weird picture. Karl Childers (Thornton) is released from a mental hospital where he has been incarcerated at since he was 12 years old. When he was 12, he killed his mother and her boyfriend. He returns to his hometown and befriends a kid and they become fast friends.

The little boy in this movie is played by Lucas Black who stared in one of my favorite short lived TV shows "American Gothic. In that show he would talk to his dead sister who would appear to him and he would try and thwart the plans that the evil sheriff, who was indwelt by Satan and played by Gary Cole. This kid could play some endearing roles and he had that "poor hick" look to him that made you root for him. In this movie he is once again plagued by a mean adult, his mother's boyfriend, who is abusive and at times violent.

It is really interesting to watch the progression of Karl and Frank (Black) both as friends and individuals. You can see Karl look at Frank as a younger version of himself and he tries and protect Frank from some of the things he went through. You also clearly see the parallel between what he went through with his mom and her boyfriend to what he sees with Frank's mom and boyfriend. Frank seems like a great kid because any other kid who would have met Karl and his "weird voice" would have been quick to make fun of him. It just shows you what a heart Frank has and I think Karl can see that. I have to say that the weird, convicted killer isn't the weirdest character in this movie. That honor goes to John Ritter's character who plays a gay man who is friends with Frank's mom. This character is a bit out of place in this movie and I could almost do without him. The only thing he adds to the film is to show how much more messed up Frank's life is. Dwight Yoakam who plays the mom's boyfriend is a great bad guy. You instantly hate him and you'd wish he could either die or completely change his way. He reminds me of the boyfriend from "Waitress".

This movie isn't really about a psycho killer it's about relationships. I still find it funny whenever I watch Lucas Black in anything other than American Gothic I was waiting for him to talk to his dead sister. The acting is good because it's about "normal" people and you feel for Thornton's character right off the bat, which helps through the rest of the movie. With the talent I see from Thornton in this movie makes me weep to know that he has this calibur of acting in him but he does crap like "Bandits" or "Bad Santa". It's definitely a touching film with a good ending.
Posted by Film Geeks at 9:18 PM