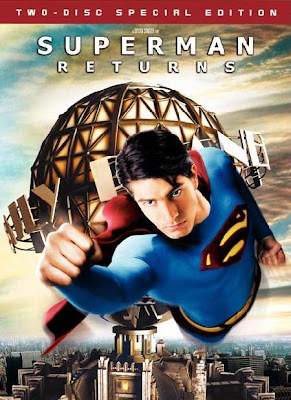 This movie was almost a decade in the making. Not for reasons of technology trying to catch up with the creator's imagination or anything like that. We had to wait so long for this movie because the script went through as many rewrites as India has telemarketers. The scariest part of this movie was the first person picked to play Superman was going to be Nicolas Cage. If that would have happened, you would have seen me on street corners throughout the world chiming of the end of the world is neigh! I think that's in the Bible, "Lo, and if an actor with little talent and blading head would play the man of super let your children cry out in the night, let your women cry tears of sorrow, and let your men tremble with fear." Of course that could be talking about any Nick Cage movie so I don't know. However, just try and image a more horrific image than a balding, untalented, looks like a puppy dog who's been hit with a rolled up newspaper actor try and play the man of steel. I weep for our species when I consider that was not only an option, but the first choice.

For my superhero movies I like lesser-known actors. I think they have the ability to bring a lot of new talent to great characters but without bringing the big-headedness of big Hollywood actors. I do have to say that Brandon Routh was a decent looking Superman/Clark Kent. Unfortunately, Brandon Routh is the only well cast person, or at least his character is written in the best way.

My other three complaints with this movie's casting might have to do more with the way the characters were written. Kate Bosworth as Lois Lane was a boring choice. She neither embodied the independent nature of Lois Lane nor pulled off a sense of beauty that would attract the most powerful man on the planet to her. The character of Lois Lane was written atrociously. If I didn't know any better I'd say this was Bizarro Lois Lane. She was weak, annoying, and not even close to the hard hitting reporter she's suppose to be. The character of Lois Lane has a lot of history you must carry with her. In the 1930's women weren't considered professional or strong or even good at "men jobs". Lois Lane is the first, real true feminist heroine. She can outshine even Superman at her job and she's not some weak female who screams her head off and plays the damsel in distress. Sure, Superman saves her from time to time, but she's not one to wait in the tower while her hero princes comes to rescue her. The Lois Lane in this movie for some reason, comes to hate Superman and is good for nothing. I would have suggested that we trade Noel Neill (who played one of the Lois Lane's in the TV show who had a cameo) for this character. She would have known how to play a better Lois Lane. There is no chemistry to this Lois Lane and there's not one inclination of attraction that she has for Superman.

My second big gripe is the way Lex Luthor was written. Kevin Spacey, I thought, would have done an excellent job as Luthor. I'm a big fan of Spacey's work and I can't say there hasn't been a role he's been bad in...until now. I believed Gene Hackman's Luthor over this one...and Hackman wasn't even bald! Kevin Spacey either didn't know how to play Luthor or his character was written so out of context. Luthor is not a methodical genius in this movie. He is not evil or bent on world conquest. His plan is so stupid that it makes spray on hair look like the best millennium invention. Luthor seems to yell and scream a lot and I don't know how this guy is suppose to be Superman's arch-nemesis. Also, Luthor isn't head of a corporation so he can use technology against Superman. Instead he marries some old rich lady who dies. Wooo, real clever there. There is so much wrong with this character and the way he was portrayed. This is not the true enemy of the strongest man alive.

My third gripe in the cast is James Marsden as Richard White. Is it Marsden's goal to cry and whine in every movie? This guy just reminds me of a really tall six year old who doesn't get his candy bar at the store. I expected Marden to drop on the floor in some scenes and just throw a temper tantrum.

Let me talk about the director now. Bryan Singer had his own vision for Superman. While most of the time that's ok for superhero movies there are certain tenants that you must stick to. For example, if Superman didn't fly you couldn't really consider him Superman (although some comic series say that Superman can't fly but jumps, still you get my point). Singer's vision for this Superman was to make him asexual. He didn't want Superman to really be part of the world he swore to protect and that vision shows in this movie. Superman seems to treat Lois as an object rather than the love interest they are suppose to be. The worse part of his vision is that he completely goes against it when you come to find out Superman and Lois had a son (more on that later). You also don't have a lot of Clark Kent in here. You also don't have Superman doing a lot of good deeds either. Sure he rescues a few people here and there but that's like watching Spiderman stop one purse snatcher and calling it a night. With no chemistry at all between Superman and Lois why did Lois even need to be in there. We get it Singer, you're gay, stop messing with our superheroes. Just because you don't like women doesn't mean our comic book hero don't have to either. We were so worried that they would change the costume of the character more than what they would make him do and be. It really is true that this Superman is some sort of sexless, quite alien that shows throughout this movie.

I'll explain the plot and then tell you why it's boring and stupid. Superman has come back from his excursion of trying to find Krypton. He tries to pick back up his normal routine but the world seem to have forgotten him and his love, Lois Lane, hates him. Meanwhile, Lex Luthor has been concocting an "ingenious" plan. He's going to fuse Kryptonite with a crystal that made Superman's Fortress Of Solitude. Then he's going to throw it in the ocean and upon expanding he will have new land that he, somehow, owns. This will cause sea levels to knock out a lot of the world and people will come to him to buy land. Superman must stop him, but how? Kryptonite is his weakness. Also, we learn that Lois had his son but she's hooking up with Perry White's son.

There are SOOOO many problems with this plot. First and foremost, the plot is moronic. Luthor is going to get rich off destroying America and a big part of the world by selling them land? For a super genius that is the rival of the man of steel, Luthor is loosing his touch. What was with swindling the old lady out of her money? This is Lex Luthor, he's an inventor and a genius. What happen to his fortune? Also, Luthor was crazy but he wasn't a mad lunatic; yet in this movie he seems off his rocker. How dare he interrupt Lois Lane saying Superman will save her by just yelling out "WRONG!"? That was a perfect opportunity for a one liner. This movie also has five different writers working on the story, characters, and screenplay. That seems a bit excessive. How hard is it to make a decent Superman movie?

Second of all, Superman embodies truth justice and the American way. Whether we agree with it or not, Superman embodies old ideas and I don't think he would have premarital sex with Lois Lane and produce a child and just leave. Not to mention, when did these two have sex? We can point to Superman II where Clark gives up his powers and knocks around with Lois and then wipes her memory (post rape?) with the super kiss. Still, fathering a child out of wedlock seems unlike the Superman I've known from any source (other than those of today that try and reinvent a dirtier version of Superman).

Third, does Superman really do anything in this film? He saves a plane, stops a burglary that has way too much firepower, and stops Luthor. The rest of it is Superman looking "messiah-like", almost emo-ish, at the planet and trying to figure out his relationship with Lois. This was a really boring Superman movie. Like the Hulk movie, I want to see Superman hit something! Hollywood has this obsession with making movies that shouldn't be actiony have explosions and random action. Yet, when they want to make a movie that the audience would appreciate Superman punching tanks or destroying a huge meteor with a few power blows, they give us a bloody love triangle.

This movie makes Superman IV seem like Casablanca. I wouldn't even call it a Superman movie. The visuals are nice, I'll give it that. I like some of the iconic imagery used such as Superman hovering over the Earth and we hear all the problems he can deal with, all the people that could use his help. It's a touching scene. Also the minigun scene and the bullet in the eye is just awesome. Too bad the rest of the movie didn't have anything like that.

However, this movie lacks anything Supermanish. There is one, and only one, thing that is on par with a Superman character. After S. puts the plane down in the stadium he says that air travel is still the safest way to travel. It's the only "all American, tomboy, superhero" real Superman thing in the whole deal. It's just too bad that the older Superman movies said the same thing in regards to the subway scene. Luthor's plan is moronic and Spacey does a horrible job with the character.

Superman's love child and a love triangle made me feel like I was watching a sequel to Pearl Harbor. Yes, it's that bad of a story element. You can't tell me there are strong parallels between Routh and Marsden. Shoot, even Marsden's character flies a plane!

I hope that the next movie that's done is actually done by someone who has at least read one comic book and not trying to preach a non-homosexual / non-heterosexual, believable Superman!
Posted by Film Geeks at 10:03 AM