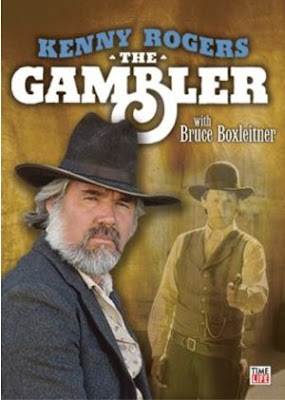 There is something pretty romantic about old west movies. There are movies where you can't tell who the good guys are and who are the bad guys. Those are movies like Clint Eastwood's "man with no name" character. Then there are western movies where the good guys are clearly defined and the bad guys could only be more identifiable if they rubbed their mustaches and tied women up to railroad tracks. "The Gambler" is one of the latter.

Kenny Rogers plays Brady Hawkes who is one of the countries most respected and high ranking card gamblers. He meets up with Billy Montana, played by Bruce Boxleitner (from "Tron" and "Babylong 5" fame) on a train going to visit Hawkes' son that he never knew he had. Brady teaches Montana a few things about cards and just because you say you're the best, doesn't mean you are. You have to back it up. The two become friends and help each other get out of a few scrapes they encounter on this train ride.

Kenny Rogers' biggest hit song was made for this movie too. It's one of those kinda country songs that gets stuck in your head after watching the movie.

As far as gambling, western movies go this is probably one of the best you could watch, other than maybe "Maverick". I still get a kick out of Bruce Boxleitner in this movie. I still remember him from Babylon 5 so maybe some of that charisma carried over to this movie. Kenny Rogers isn't a GREAT actor but he's at least believable. He plays Hawkes like how he should be played. Hawkes has class, he's got a bit of smart thinking, and he can read people and situations pretty well. You got to have a gambling cowboy who knows everything that's happening, even if it's a sharpshooter hiding on the second story of the saloon that you can't even see and you know where he's at. I digress. Kenny Rogers isn't that great of an action hero either and the scene in the saloon where he's fighting is almost like watching a bad kung fu movie where the hero could never take out the entire gang; good thing he had Bruce Boxleitner though! John Sheradon can free Mars from Earth oppression, he can take out a few galoots in a saloon! The Gambler is a decent movie, especially one that has the bragging rights to say "hey we liked this song...and we made a frickin movie out of it!"
Posted by Film Geeks at 12:14 PM

Maybey you can explian for me the reason that at the end of the movie and ll the Gambler movies that " to be continued" shows up and the story is never finnished.