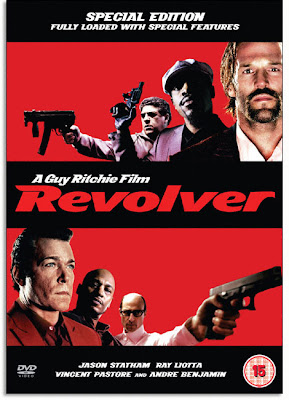 I am a big fan of Jason Statham. I think he's one of the best action star of today's cinematic experiences. You put him in anything and I'll watch it. I knew going into Transporter 2 and Crank that the stories were a bit hinky. However, if I get to see Jason Statham punch someone or shoot someone or jump a car over a helicopter I'm satisfied.

So when I see the same director who gave us such classics as "Lock, Stock, And Two Smoking Barrels" and "Snatch" (a personal favorite of mine), I was excited. Look at that cover; doesn't it scream action pack to you?

Ya, that's what I thought to until I was half way through this movie and nothing really happened. Then when I was three quarters of the way done with the movie and still nothing happened, my heart sank.

Jack Green (Statham) just did seven years in prison. While in prison he learned and was taught how to beat any game and carry out any con. When Green wins a game of chance against crime boss, Dorothy Macha (Ray Liotta), he has basically painted a target on him. However, this was all part of Green's plan to get revenge at Macha for putting him in prison. Green will do anything to get back at Macha. So when two loan sharks, Avi and Zack (Andre' "5000" Benjamin and Vincent Pastore respectively), want the same thing Green is happy to help. But is Green being coned? He soon finds himself at the hands of Avi and Zack. The question remains, do they want what he wants or do they want something else?

This is not the movie I was expecting. This has the feel of a reused "Fight Club" feel to it. Jason Statham hits no one in this movie at all! You put Statham in a movie directed by Guy Richie and I expect him to at least knife someone! Ray Liotta plays a great character in here and outshines Statham's character. However, I don't see the need for just about every movie with him in it to show me his butt. Andre' 3000 does a bang up job in this movie and I would like to see him do more of these types of roles, kind of like Mos Def.

This movie tries to keep you guessing on what's going on, who's real, who's not real. There are so many attempt to shine light on just who is and who and what is what that I got lost after the supposed "big reveal" and had to go on the internet to look up answer! This is a perfect example of a movie trying to be bigger than it should have been and it showed that Guy Richie has a limit to how much story he can handle. There's a few good action scenes, but don't be confused. This is not an action movie! This is a wannabe thriller-with-a-twist and it's so confusing and horribly executed. Let "Fight Club" be that good movie with this type of storyline. After all, I'm still trying to figure out all the answers from "Matrix 2 and 3", this was just nonsense. Mr. Statham, please stick to the action genre. You are a wonderful and bankable action star.
Posted by Film Geeks at 11:29 PM