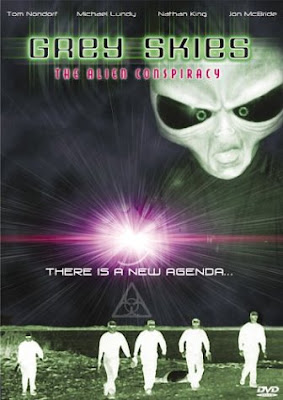 There are times when I don't understand how a movie gets made. I see some passion and care in really bad 70's filmed-with-a-home-camcorder movies with just enough plot to actually have a storyline of sorts. However, there are times when I see that same quality of movie but I have no clue what the plot is about or why anyone thought to make the movie (let alone two sequels).

The two writers and directors, Kevin J. Lindenmuth and Tom Nondorf have a slew of "bad" movies under their belt and some of them look like they actually make sense. There's no one of fame, in the least, in the movie and if the people who "starred" in this picture are anything more than friends and family of the directors, I'd be shocked.

"The Earth has become a three way battlefield between humans trying to defend against two different alien species bent on taking charge of the planet. The Greys are an alien race who want to destroy the earth in a nuclear blast while the Morphs want to preserve the planet for their own purposes. Meanwhile, several fellow Earthlings are doing what they can to protect our troubled planet." (Comes from the IMDB page)

Now I wish I could tell you what this movie is about but I'm afraid to do that, I'd have to drop acid laced with stupid. I would say this movie is weird except that it's far too stupid to be considered cutesy weird. The movie starts out trying to be a semi-documentary but it all of a sudden gives up on that whole notion. We're shown the Greys a few times in the beginning, but other than the aliens looking like people dressed up in Big Lots alien costumes, they don't seem to have a role in this movie. There's also some random guy who is trying to interview for a job but he's really talking to a shape shifter. I don't know, that's what I got out of it. I ended up cutting my eyeballs out with a rusty spoon and seeing how much salt I could pack in. It made more sense then anything in this movie.

It got a lot worse too. You have a guy interview Death, for some apartment reason. You're thinking to yourself, "Well there has to be a transition in there and it has to do with the overall story. This guy is just leaving it out." You are wrong. There is no reason given why a random character is getting an interview with Death, who is once again a cheap Halloween clad figure. After we are shown a normal day in the life of Death. Then what happens? The movie is over.

No plot, no actors, no coherent storyline, no transitions. This was nothing. It was worse than nothing. You can't watch nothing. This was worse than watching an elephant being thrown from a plane and after he hits the ground you have a bunch of naked Smurfs drink up the carnage. The guy who goes for the job interview, the interview with Death, the start of a mocumentary that just stops, I don't get it. How is this a movie? Also, how did two sequels get made? I understand independent films, but even a 30 second short involving gay, clown cowboys cleaning their dishes with their feet would make more sense than this movie.
Posted by Film Geeks at 11:46 AM

Hello, I came to your blog and started reading along . I decided I will leave my first comment. I don’t know what to say except that I have enjoyed reading your blog. Nice blog. I will keep visiting this blog very often...
Brain Dumps