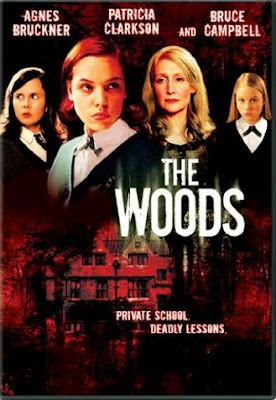 I pretty much rented this movie because Bruce Campbell is listed in the cast. The sad part is that he's only in it for a couple of minutes. Although he is once again great in the little part he is in and he really is the hero of the movie. So, Hollywood, to get me to see your movies I need more Bruce Campbell. I would even see Spider-Man 3 again if there were more scenes of him.

The film is set in New England in 1965. Heather Fasulo (Anges Bruckner) is being put into Falburn Academy, a boarding school, mainly by her oppressive mother. She is accepted into the academy by the headmaster, Ms. Traverse (Patricia Clarkson). However, something is not right about the school, or the woods surrounding it. It all comes to a head when Heather starts seeing visions and hearing voices and some of the girls start to disappear.

Ok, where to start with this review. First of all there are a lot of things wrong with this movie. The script is pretty poorly written and there's no real sense of direction for the movie to take. It almost seems like the film was just thrown together.

The movie also has a hard time revealing clues and conclusions to you. In the end, you find out some of the answers the movie sets up, but you don't get all of them. The following might be a big of a spoiler so be warned if you intend to watch this movie. One of the questions they don't really answer is why all three girls are needed. It seems like if the people are witches they could have done what they forced the girls to do.

There was also no real reason for the girls to drink the milk until the witches needed to do what needed to be done. Also, would the "wood spirits" or whatever have inhabited the girls' bodies? Another problem is that there was no real reason for the woods to take the girls and leave piles of leaves where their bodies were. Why didn't the witches just take the girls they needed and tell the other girls they were sent home? Also once they had all the people they need, why didn't they just do what needed to be done and it'd be over with it? Instead we are treated to many nights of Heather in bed, dreaming, waking up in a fright, and checking things out.

The film seems to have a bad bipolar disorder too. Through half the movie it's a bit eery but not much happens and then all of a sudden really weird stuff happens. A really good example of this is the bully (played by Kathleen Mackey). You have your typical repressed, Ms. Popular, bully in a reform school setting. She's a real you-know-what through half the movie and then all of a sudden she knows the truth and has to be silenced because of it. Also, Heather seems to go from Ms. Calm and Cool, bad arse chick to crazy without a build up of any kind. Also right in the middle of the movie you have a twist in story telling and it almost appears to be a twist for having a twist sake.

I also have to mention that there is a rip off scene from another witch movie "The Craft". The main character begins playing with her pencil on her desk and soon it is balancing on its own. The same scene basically happened in "The Craft" as well.

The best part of this movie are the teachers. The teachers are deliciously crazy. Some are calm at one point in time and then just freak out or they have a calm soothing voice as they are trying to get away with whatever their plan is. The best is the teacher with the horned rim glasses, Ms. Leland (Catherine Colvey).

She doesn't say anything throughout the entire movie but she doesn't have to. She says everything about herself with her facial features. She's one of those characters who is in control and knows it and knows what's going on.

To mention again, Bruce Campbell has little to do in the movie but is still the hero. He is the guy who saves the day really. If it wasn't for him, no one would have survived. I imagine Bruce Campbell as God's right hand man in the movie universe. No matter what, he is always the real savior behind anyone. He's the one that really save Lois Lane in "Superman", he's the one who really saved the world in "Armageddon", and he's the real person who pulled Jack under the water in "Titanic". If I ever become an independent nation, Bruce Campbell's face will be on my flag and I might even consider naming my country Chintopia!

This movie is poorly written and poorly directed. The characters are uninteresting and having sporadic, random mood changes. The ending makes little sense and not everything is revealed or answered. The only saving graces of this movie are the wonderfully creepy teachers and Bruce Campbell coming to save the day. The bad guy's scheme is poorly carried out and I don't know why they had to wait so long to carry it out. Taking girls with living trees and leaving leaves in their place didn't accomplish anything that randomly kidnapping them would have accomplished. If you love movies that constantly show girls in mid-20th century sleeping attrire as well as the main character sleeping, dreaming, waking up in a fright, and going to explore only to reveal nothing for a majority of the movie you'll love. For the rest of you who like a coherent plot where you don't feel yourself cheated out of a story and an ending, stay away from this one. Go Bruce Campbell!
Posted by Film Geeks at 9:01 AM