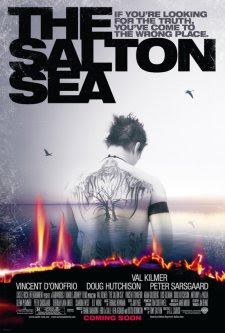 I've never done drugs. I've never wanted to do drugs. I can't stand people who use drugs. With that being said, I like drug movies. Let me explain. With drug movies you have a relatively good chance of being entertained. You're either going to see the weird crap that goes on either dealing or using drugs or you're going to see some weird trip outs. So like I said, it's really hard to make a drug movie that isn't somewhat entertaining. At least, I thought that at one time. Then I watched this movie.

After his wife is murdered Danny Parker (Val Kilmer) suddenly becomes involved in the drug culture. He makes friends with Jimmy the Fin (Peter Sarsgaard), don't you just love street names? He also tries and help his neighbor Colette (Debra Kara Unger) from her druggie life and her boyfriend, see the irony there? Anthony Lapaglia and Doug Hutchison play two undercover narcotics agents who keep hounding Danny. I also have to mention that Danny does some dealing with a very mean dealer, get this street name, Pooh Bear, who has done so much coke that he lost his nose and uses a prosthetic one. He is played by the always talented Vincent D'Onfronio. There are also two kinda weird stars in this as well R. Lee Ermey and Meat Loaf. I just had to mention it.

This movie isn't hard to follow it's just hard to stay interested in. With a drug movie you have to make it an effort to make a movie that isn't entertaining for the most part. I would also like to say that the makers of this movie are really high but I've seen "Fear And Loathing In Las Vegas" and I know everyone involved was high in someway, not to mention the original writer, Hunter S. Thompson, was barely sober in his life. So I know you can make a good drug movie while high, stoned, or tweaking. Val Kilmer was a good actor at one point in time. He was the late 1990's Ben Afleck or Matt Damon. However, he is the weakest actor in this movie and he's one of the most sober! The ending is a bit stupid as well and is kind of random. It makes me feel as if the writers wrote what they wanted to and need an ending. There is one good and entertaining "fight" scene that is kind of dramatic.

This movie is not very well written or acted. The plot, what they try and call a plot, doesn't really make sense and likes to skip around. It might just be me but it seems like not the best thing to do to make a drug movie complicated. The end scene is a bit nice, artistic wise, but again not very well acted through out. Of course when you're suppose to play "high" or "stoned" it doesn't really help. I just want to know how actors can read some of the scripts and say to themselves, "Not only is this good but I would also like to be a part of this crapfest". It always makes ME wonder!
Posted by Film Geeks at 9:50 PM

Seems like you missed the point of the movie. It isn't called "meth" or "tweeking"...it's called THE SALTON SEA. It is more of a movie about a man who lost his wife while lost at the Salton Sea and who somewhat gave up on his own life before trying to find some sort of redemption. Drugs were not the focus of the movie, they were a major element that added another dimension to the plot. Your review fails even to mention the major plot focus....the fact that the main character lost his wife and ultimately seeks to get revenge on those who are responsible for her death - the meth lab tweekers and dealers!

You are right that I failed to mention the motive of the main character, but I believe that was one of the faults of the movie itself. There really wasn't a lot of structure to the motive since it's really only mentioned at the beginning of the movie. It then is just about how uncaring the character is and he really only takes a few drug dealers but by the time he does I've pretty much forgotten he had a wife.

Dude if you are planning on becoming a serious movie reviewer, at least jave teh friggin decency to properly WATCH the damn movie, you should be ashamed of yourself, and im not saying this is the best film ever or something, i give it a 7/10, but seriously, try harder

Morono, dude, if you're going to become a critic of critics you're going to have to be more specific than "watch the movie" and "try harder". That's like telling a 6 y/o to hit the ball when he's at bat but not help him with anything involved with the art of swinging a bat. Way to fail....but hey...thanks for reading.