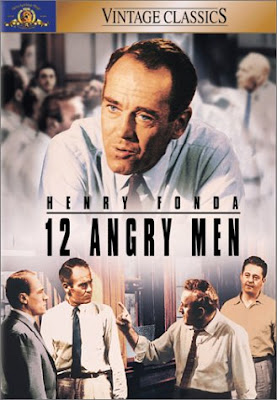 Today's drama movies have nothing on old classics. Sure they might have some decent actors and some fancy twists, but they still fall short. Older movies have great actors and fancy twists as well. They also have one more thing - original story ideas. That's why Hollywood has to reuse and reuse and reuse ideas from the golden age of cinema. When given the option to watch these classic giants, take it upon yourself to add a little class to your life.

While most of the time I tend to credit the writers or the directors for making a film what it is, it rarely is the case where the actors carry the main gusto on the movie. Just another difference between today's movies and those of yore; today's movies have to throw in sex scenes or random violence to appease an audience. It's not that this movie is badly written or directed (written by Reginald Rose and directed by Sidney Lumet) but it is nothing compared to the acting of all twelve people in this film.

The actors who played the jurors, in there respected juror numbers are the following: Martin Balsam, Lee J. Cobb, E. G. Marshall, Jack Klugman (of Quincy fame), Ed Binns, Jack Warden, Henry Fonda, Joseph Sweeney, Ed Begley, George Voskovec, and Robert Webber. Each and every one of these roles were perfectly filled and perfectly executed.

The story is pretty simple. A young Spanish-American man is on trial for the murder of his father. The audience is thrown into the story after both sides have rested and the judge gives the jury their instructions. It seems like a cut and dry case and all the jurors seem to agree to the boys guilt and want to get out of there as quickly as possible. All except one low juror. Henry Fonda plays the one lonely, dissenting voice. Now he has to try and convince not only everyone to listen to him, but to prove to them why he thinks the boy is innocent.

There are two problems I have with this movie I want to cover before I get to the grade and explanation. While this movie was shot wonderful and acted wonderfully, there are two deep, glaring inconsistencies this movie can't get away from.

First of all when Henry Fonda tells them about knowing the layout of the area the murder occurred. He tells everyone that what was reported by one of the witnesses was inaccurate. When you are chosen for a jury you are told that whatever facts you know about an area or a person before the trial starts must not come into play. You must only go by the information that was entered to in evidence. This would have been cause for a probably mistrial.

This next problem would not have only caused a mistrial but would have gotten Henry Fonda thrown into jail. The murder occurred with a knife that was supposedly very unique. The jurors make the point about how there couldn't be another knife and the defendant was known to carry that same knife. It's a great scene when Fonda opens a knife and slams it down on the table. It's a very dramatic scene. He then goes on to explain that he was in the area that the murder occurred and found this type of knife being sold. The two problems with this is that a jury is sequestered and is definitely not allowed to visit the place of the murder area unless if the entire court goes with instructions from the judge. Second of all, a juror is not allowed to do his/her own investigation must way the facts and evidence that were laid out in the trial only.

These are two small points, and only a movie snob like myself would get flustered by these facts.

When I say this movie is a drama I mean that each and every sinew and fiber is thrice coated with a layer of drama and each copy of the film is dripping with it and lays in a pool of its own drama.

There isn't a bad actor in any of the twelve people I listed. Henry Fonda outshines the others, but I don't want to detract from their talent. This movie also refers to the characters by their juror numbers. The interesting thing about this is that you get to know the characters pretty well. You get to know who they are, their motives for their decisions, and a lot of personal information. Yet you don't get to know their names. At the very end, you do learn a few of their names. It really leans on the idea of showing the entire "world's a stage and all men and women players". There isn't much more I want to say about this movie because it would detract from the viewing experience. I will say that if you're a fan of some intense drama - this movie is for you.
Posted by Film Geeks at 1:20 PM