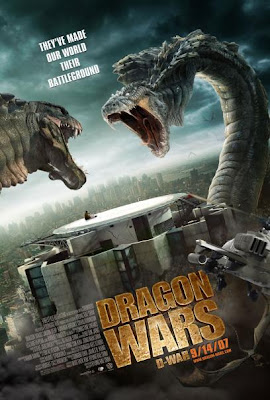 Alright, now we're talking! This is a bad movie! Yep, that's right, I am giving you the grade first! Grade - F. But that's no fun to judge B movies based on the standards of good movies. How could I take such glee in watching movie greats like "Killer Klowns From Outer Space" and "They Live" and countless others that I cherish.

I guess this movie is a big hit in Korea and was writen and directed by South Korean native, Hyung-rae Shim. This movie just has two stars of interest. Jason Behr plays our hero in this flick. You might remember him from that great, yet short lived, TV show "Roswell". I really like him in the show and it's too bad we haven't seen him in anything good. This movie has has "the black guy from 'The Office'". The black guy from "The Office"'s name is Darryl Philbin and is played by Craig Robinson.

I just want to start out by saying that whatever else I write about this movie will not do it justice. This is a movie that should be experienced through viewing more than reading a review. What I describe the story as is not as complete as it should be and is not as funny to see. The "complaint" I make are not as funny to read about, but watch it with the review and checkoff what you see and find it as hilarious as I did.

Every 500 years a group of lizards, who are really gods, do battle with the help of good and bad human subjects. So far, the good guys have thwarted all attempts for the bad guys to destroy the world. However, in the modern era, the people do not believe in dragon anymore and so are unprepared. Can humanity survive? Reporter "Ethan Kendrick" (Behr) has been chosen to be the protector and savior of humanity. Actually he is being called again because in his past life he was Korean and the protector 500 years ago. He must stop the bad dragon that is coming, the Imoogi, from eating a girl who has a mysterious illness. If the bad dragon eats her, he will gain the power to destroy the world. The girl is living in LA and so the dragon starts to wreaking havoc and destruction on the city. Ethan finds Sarah (the girl with the illness played by Amanda Brooks) and tries to protect her from not only the Imoogi but its minons who have the ability to summon dinosaur like creatures (both tank like and flying types). We later find out that there is a good dragon to come and protect them. Will Ethan and Sarah save not only themselves, but all of humanity?

I will give the grade on a B movie level scale first and then I will go into all the things to look for that make this movie so fun to watch.

This movie is hilarious. It is so odd that I can't believe Shim wrote this sober. Maybe it's a Korean thing like "Pom Poko" is a "Japanese thing" movie.


1) There are flashbacks within flashbacks. This is a pet peeve of mine. It's like holding up two mirrors parallel to each other and seeing how far you can look back.

2) This movie tried to inject Korean words into the dialog and uses them. I got so mixed up on what was what that I just rooted for the destruction. The way the story is written or told through narrative make it very hard to figure out which dragon was the good one and which was the bad one.

3) There are 3 people in this movie who use to be Korean/Asian in a previous life. In this life, they have acceded and attained the level of whiteness. Then it goes on to say that the higher level above whiteness is godhood. I am not lying here. If you're Korean, in your next life, you will be white. After you die when you're white, this movie teaches, that you will attain godhood. I love it! It's like when Japanese anime base all their character looks as white people and not at all like them.

4) The bad monster is a moron. He needs to eat one person in order to be the supreme ruler of the world. However he goes from traveling 100 MPH chasing the girl and when he has her cornered, he, for some odd reason, slows down and drag it out, which means that he looses his prey and the win. He will seriously corner her on top of a building and after snaking up it with no problem, he will go towards her like she's going to hurt him. Towards the end of the movie he does the same bloody thing, which means he gets stopped.

Along those same lines, any minor distraction has to be dealt with by him instead of just quickly gobbling up his prey and THEN taking care of the minor problems after he's obtained his supreme power. A car will slam into him and he will scream, sure, but the car is destroyed and is therefore no longer a threat. Just eat the girl and then take vengeance!

5) There are helicopter pilots who believe as they are about to crash into the sides of buildings are going to avoid all injury by throwing their arms animately around their face.

6) There is an amulet Ethan wears for protect. What does it do? Why does he have to wait until he's tied up to use it? It didn't really seem to protect him at all.

7) The bad human-ish guy towards the end, instead of cutting off Ethan's head and taking out the girl's protector, he touches the amulet with his sword lightly and it suddenly destroys him. What reason is given? None. I don't know why he dies by lightly touching the amulet with his sword. I also don't understand why he did it. He makes a sarcastic comment on how well it has protected Ethan. Hey buddy! Don't touch the one thing that, for some reason, makes you evaporate!

8) Why does it take till the end of the movie for the good dragon to come help? He comes for no reason either. Also, the good dragon can somehow make the girl's energy ball, that the bad dragon needs to take over the world, to come out of the girl and he can ingest it. This causes him to transform into a super-dragon.

These are just 9 funny things about this movie. Watch it and send me others to add to the list.

This movie isn't all bad either. The animation looks pretty sweet. The biggest chunk of money was given towards the animation. The dragons fighting is awesome and the military fighting the dinosaurs are great battle scenes. If they put even half the thought and talent into the actual story that they did the graphics, this wouldn't be such a bad movie. This is definitely a great B movie though!
Posted by Film Geeks at 10:48 PM