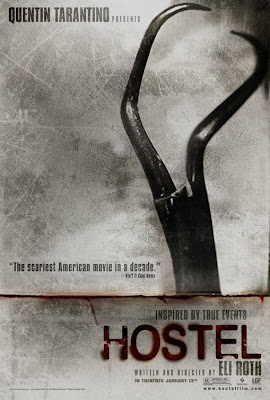 I admit it. I am a fan of old slasher films. These are films that started pretty much in the late 60's early 70's (though there are others that have come out earlier and later). Slashers involve not just hacking someone up but also what is know as -plotation films. There are sexplotation, zombieplotation, Naziplotatoin, and others. A lot of them would be considered bad. However, most of my fans (ha ha ya I know, I kid myself) know that I am a fan of bad movies. However some of the movies are decent when looked at in the day they were made. Hostel isn't the first movie of this new tortureplotation breed of films that are invading Hollywood but it's one that looks like a more classic film.

Not only did Quentin Tarantino produce the film (which gave me the OK to see it) but Eli Roth ("Cabin Fever") wrote and directed the flick. I didn't know any of the actors but I wasn't sure if they were going to use real actors or wannabe actors like the old slasher films use to use.

While backpacking through Europe, Paxton (Jay Hernandez) and Josh (Derek Richardson) are taking a vacation with sex, drugs and unforgettable experiences. When a friendly stranger informs the two of a hostel in Bratislava that offers the most beautiful and promiscuous women in all of Europe, Paxton and Derek trek with their new Icelandic friend Oli (Eythor Gudjonsson) to find the hostel that sounds too good to be true. Tempted by beautiful women Paxton's friends disappear one by one. He soon is kidnapped and taken to a place where rich men in a secret society pay to torture and kill people. Paxton must try and escape and expose the society.

This isn't a horrible movie but it's a movie that you must enjoy the genre it's in. However, this movie lacks some of the charm that the older slasher films had going for it. The hardest character to like in this film is Paxton himself. I didn't really understand what he was doing in Amsterdam or what he thought a wild vacation would entail. It was almost like he didn't want to be there.

As far as these types of movies go (e.g., movies where psychos hack up the cast but aren't supernatural) this is one of the better ones. The first 30 minutes is sex and drugs which is why I believe all these movies should be shown to little kids. Never have premarital sex and do drugs, you never know when you'll be in a horror movie.

The reason I didn't rate this movie higher was that it didn't spend enough time with the victims. They killed off the main cast way too fast and there was no artistic approach to the work done in the main killer's work. Another reason for the rating was that the escape part wasn't long enough. They never built up the anticipation. I do have to say that this movie at least lets the character try and save people but of course the characters have to be morons and do the most unbelievable things. If this movie was a bit more like Scream and Saw I would have given it another grade higher. It's not all bad so see it if you're a horror fan in some way...and stomach some of the best horror scenes I've seen in a long time.
Posted by Film Geeks at 1:49 PM